You can tell the financial status and well being of your community by just looking around at the houses, available resources, and talking to the people. With that in mind, I have learned the awesome talent of being able to observe a lot about a family by looking at their house in Botswana. Look out America, this is Finda’s rendition of cribs:

Unlike America, where most people buy already built houses, a lot of Batswana usually buy land and build their own houses. With that in mind, every property tends to have its own personality. Let’s examine some of the many types of houses that a person can encounter:

Ballin’ out of Control House
How can you tell if an owner is a “Baller.” It’s simple, all you need to do is ask yourself these questions:

Is the house made of bricks? 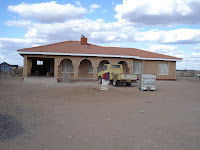 If the answer to this question is yes, this owner is surely a “baller”. Bricks are expensive to build with in Botswana. Some houses may build their porches with bricks to have the appearance of “baller” status, but if the owner has taken the time to build their entire house with bricks then that says a lot about their financial status.

Is the house protected by a large fence? 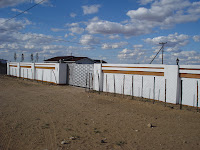 I have concluded that people who build fences feel they have  something worth hiding. Most of my community doesn’t have huge fences like the one pictured above, but once in a while you will find a house like the one pictured. Ballin’ people need their privacy and protection since they make more then others and like to do “private” things.
Do you see nice car’s, ton’s of brick’s, a pool, etc. on the property? 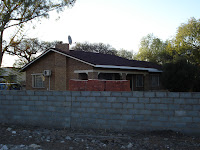 If you see any other lavish item (pool, fancy car’s, large amount of land, etc.) on the property build with bricks. This is also a good indicator that the inhabitants are doing well for themselves.

Does the yard have grass?

If I have not told you, Botswana has a semi-arid climate. With that in mind, when you walk around most communities, you will see sand. If a homeowner has taken the time to invest in adding fake grass to their landscape this could be a priorities issue or another way to identify the “baller” status of this property.

If you can answer yes to most of these questions, we have a Baller’ on the premises 😀

Up and Coming House 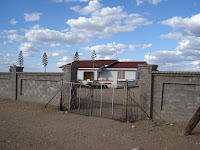 Is the property nicely laid out? Did they utilize their spacing and items built. Then this house is most likely an up and coming house. They have not yet achieved baller status, but they have the means to have a property that is well kept and nicely designed.

Homes that are in the Up and Coming category may have one or two things found in the “baller” category, but their usage of materials to build their property may vary.

For example, in the photo on the right. The land owner decided to have a big fence, but their house was built out of cement. Their roof is made of high quality material, unlike tin roofs that can be found in the community. 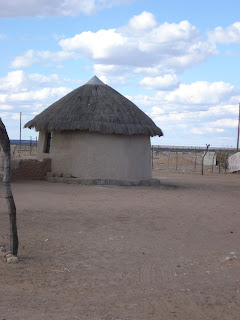 While you may see a traditional house in an up and coming property, if a property is seen with only a traditional house or a shanty, it means that the owners may have low income. Traditional houses are usually not built by choice but by circumstances in Botswana. Usually they are small enough to sleep-in and shower. Cooking usually occurs in the traditional kitchen, and a pit latrine is sometimes built to be used as the restroom. Like all properties, families have the ability to make a compound of traditional houses look very beautiful or very sad.