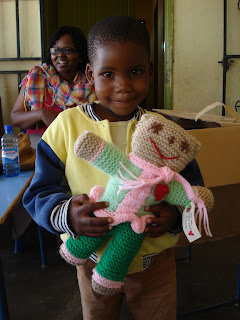 I didn’t know she was an orphan the day I met her. We were both playing with puppies in my friend’s yard. Her clothes were dirty, but after living here for several months, I only suspected it was because it was from playing. I was only able to get her name due to my weak Setswana skills at that time. I knew where she lived and that it was a shanty, but there were several family members that lived with her.

It only occurred to me that she was an orphan once I saw her at the school for orphans and vulnerable children (OVC). It also didn’t hit me until she didn’t have food for snack time. The teacher asked the student beside her to share her snack. It hit even harder, when I noticed how she made sure to eat all of her lunch, and even ate some of the left overs of other students.

Apparently there are over 75 orphans and vulnerable children in my village. The preschool that I volunteer at can only take 32 due to laws and regulations. It’s not like these children wander the streets at night. They have extended family who take care of them, but often not in the best ways that a parent can take care of their own child. I knew there are orphans in my village, but it really hit home when I saw her.

The only thing I thought about as I walked home was how can I help her and others who are similar situations. I currently help out at the OVC Pre-School, and it encourages me that my community has this resource. Often OVC’s start behind in their classes, and have to deal with additional emotional issues that you would hope no child doesn’t have to face.

I am currently working on a WordPress website for the school. I will post about it once it is finished, and when I do, won’t you have a look :D.